Loved by racers in a hurry, quick-action Accossato fuel caps for Kawasaki Ninja ZX-6R & ZX-10R sportbikes feature a keyless and quick-turn release for fast fueling. Unlike manual screw on gas caps with threads that can seize, simply push down the twist-handle and turn counterclockwise to open. Anodized black base with optional color caps in black, blue, red, green, or gold. Accossato has been producing Italian made sportbike components since 1969.

Accossato Racing products are known worldwide for their leading design and strict adherence to the highest quality standards. Accossato products are the result of their in-house design and production process that draws from its experience building racing motorcycles since 1969. Headquartered in Turin, Italy. 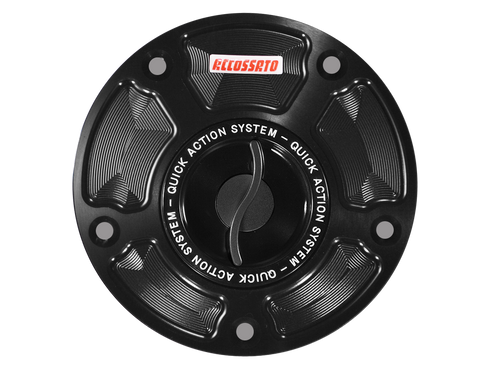